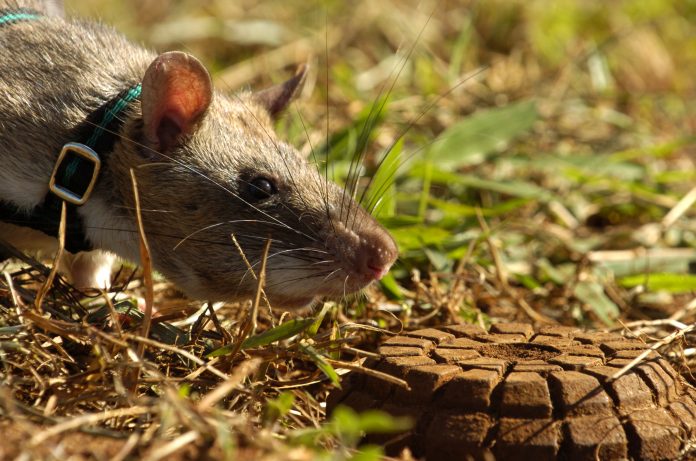 APOPO has announced that it has opened a landmine detection program in Colombia. APOPO has recently registered as an NGO in the country and has asked the Colombian government to consider the use of APOPO’s innovative landmine detection rats as effective detectors of minimal-metal landmines.

The landmine problem throughout the country consists of improvised mines. These homemade killers are predominately made of plastic and glass bottles filled with explosives, and contain very little metal. They are extremely difficult to detect for a manual deminer with a metal detector, which is the standard and most wide-scale means of detection used in the sector. Further due to the ineffectiveness of metal detectors with minimum metal mines, Colombian mine action consists of digging 6 inch deep, 1-meter-wide trenches slowly across mine contaminated land resulting in a maximum productivity for a manual deminer of about 8 square meters per day. The APOPO HeroRATs do not encounter this problem as they ignore metal and search only for explosive scent. This makes them a perfect tool for Colombian landmine detection. One HeroRAT can search up to 200 square meters in 20 minutes.

Colombia’s landmine and Explosive Remnants of War (ERW) problem is the result of more than five decades of conflict with non-state armed groups. The full extent of contamination remains vague, although the national database contains information that at least 30 of the 32 departments of the country have landmine contamination. Up until December 2016, the official government record states there have been a total of 11,460 landmine casualties, of which, 2,266 people died and 9,194 were injured. This places Colombia second in the world only to Afghanistan in terms of landmine casualties.

APOPO will begin in the country by supporting Campaña Colombiana Contra Minas (CCCM), a Colombian NGO working to eradicate landmines. APOPO will provide mine detection training to their demining staff, as well as support capacity building in the form of technical assistance. With government approval, APOPO and CCCM will then integrate the HeroRATs into their demining work.

“APOPO is very excited and looking forward to our HeroRats coming to Colombia to assist in the efforts to rid the country of its landmine legacy and allow mine affected communities to once again live without fear of these deadly weapons.” – Tekimiti Gilbert, APOPO Program Manager MA Colombia