Last November the breeding program at APOPO’s Training & Research Center in Tanzania was activated in preparation for program startups and expansions and some HeroRAT retirements. In order to […]

Last November the breeding program at APOPO’s Training & Research Center in Tanzania was activated in preparation for program startups and expansions and some HeroRAT retirements. In order to keep the gene pool diverse, wild pouched rats are humanely caught near the APOPO headquarters in Morogoro and paired with APOPO rats that were bred at the breeding center, including known attentive and nurturing mothers – which can make a difference in the learning abilities and well-being of a litter. Wild rats are released within 8 weeks in order to avoid any habituation issues. 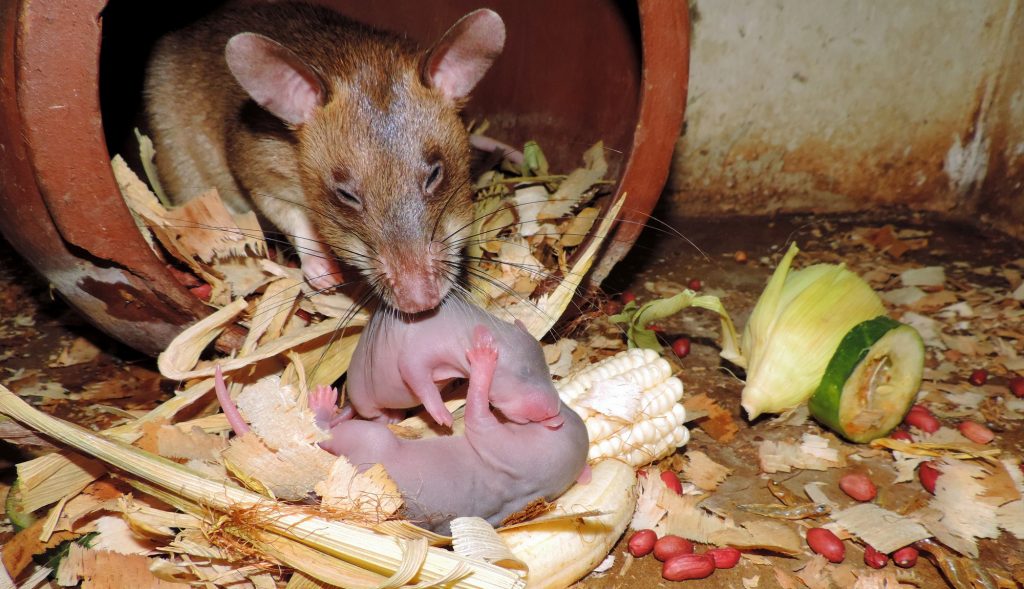 Right after birth the mother rat may not be receptive to having humans near her offspring. This can sometimes be very intense at birth and will gradually lessen as the babies get older. For this reason, the staff at the breeding center ensure the breeding kennels are a quiet and peaceful area and mothers with newborns are undisturbed as much as possible. Newborns may suckle up to 18 hours a day so the mothers will spend quite a bit of time in the nest with her babies in the first week after birth.

“Breeding season is always a special time at APOPO. As you walk around the gardens you see different people playing and cuddling baby rats. And we all anxiously await news of new births!” says Pendo Msegu, Animal Welfare Officer at APOPO.

At around 4-5 weeks the babies begin to open their eyes and are walking and this is when their HeroRAT training begins.

The NPRS wish the new generation of HeroRATs the best of luck in the future. Our Chair Louis Varley, and Events Officer Clare Varley, will be meeting them later this year at their HQ.