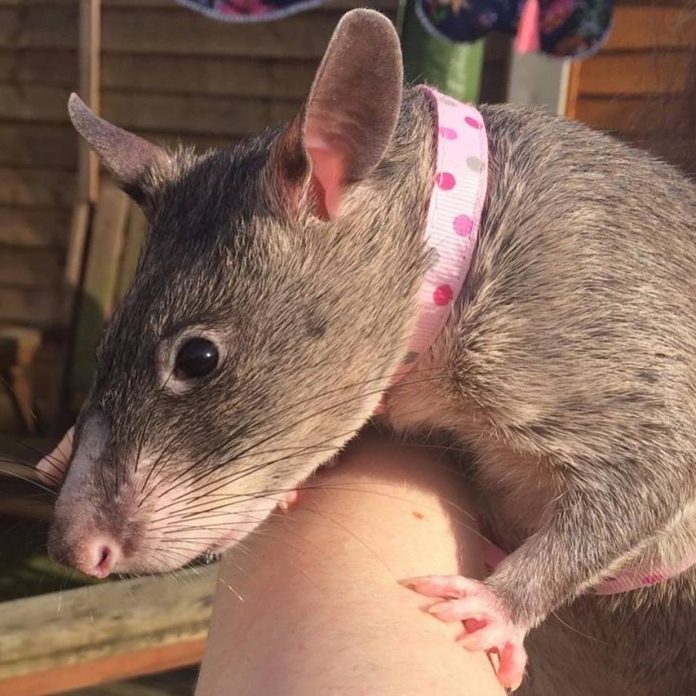 byNational Pouched Rat Society
Print
You are here:
< Back

What is a Pouched Rat?

The “Term” pouched rat covers several species of giant African pouched rats (Cricetomys gambianus) native to sub-Saharan Africa. Pouched rats are from the family of Muroidea (Muroids) which also contains mice, voles, hamsters and gerbils. Pouched Rats are one of the largest Muroids on the planet. In their native Africa they have very few natural predictors apart from man and have become a staple bush meat for many of the local people.

What does ‘Pouched’ Actually Mean?

Like hamsters, pouched rats have cheek pouches used for storing food. Their pouches are capable of storing several kilograms of food which they will then cache. They are omnivorous and will feed on most foods but tend to favour nuts, seeds, vegetables and fruit over meats.

Do they make good pets?

Pouched rats are not your traditional pet and a pouched rat is far from a large fancy rat.

Being that they have not been bred in captivity for anywhere near as long as Fancy Rats (Rattus Norvegicus) they can be unpredictable and wild, with each individual having vastly different personality types. Although they do make somewhat unpredictable household pets they can be incredibly rewarding due to their huge intelligence and playful although sometimes naughty nature.

A household which takes on a pouched rat as a pet must be well prepared for the ups and downs as well the huge amounts of time and perseverance requires to raise them.

What to expect from a Pouched Rat?

So first and foremost. Even us, cannot tell you how your rat will act or behave. Every single animal is unique and for this reason you can have NO expectations of the animal.

Your Pouched Rat may be the perfect animal. However here are some of the issues that could quite easily becoming part of every day life, even if you do goto to a good breeder…

Behavours and things to expect.

These are just a handful of the many posibilities. You may not get some, but you will get at the least one!

Again as before, please bear these points in mind…

Changes you must make to your life

Still sound like a good idea? also remember these guys can live up to 8 Years old.

Imagine that from the day you get them, thats almost 3000 days of keeping their routine the same, giving them the same attension and time out. Thats again almost 3000 hours over 8 years you may need to spend directly with them 1:1 following them around the house.

Now also add to this, you have to do this regardless of if they even want to be with you, handled, or near you.

Still found like a good challange? lets move on….

Where do I get a Pouched Rat?

The NPRS works with breeders, we enforce certain guidelines and stands on breeders, such as when they can leave mum and we deal with finding suitable owners. If you stick with good breeders and your a suitable owner then we will help you.

Sadly not all breeders in the UK breed with ethics as their first priority and this can result in babies and ultimately adults that are hard to handle, and suffer health and behavioral problems. Respectable breeders should ask you a lot of questions, they should be as dubious about allowing you to have one of their pouched rat babies as you would be in choosing them as a breeder.

Respectable breeders should never let a pouched rat leave mum until 6 weeks old. No If’s, no Buts. If alarms bell ring, walk away. Dont give them your money. These people will merely breed more. Any good breeder should also want to keep in touch after the babies leave and always be on hand to help and offer advice. There babies will be part of their own pouched rat family and will want to know they are safe and loved.

Expect to always see the parents and how they are kept, ideally before you agree to a baby. You also should expect to wait, many breeders will only breed a litter when they know they have homes for them, this could mean a wait of a few months or more. Breeders who have babies on the go constantly should be avoided as they will never have enough time to properly spend with each baby as well as the parents in keeping them tame. Also expect any good breeder to charge between £200 and £300 for a baby tops. If they charge more, they are merely trying to profit from them.

Previous The Ethics of Keeping Pouched Rats as Pets